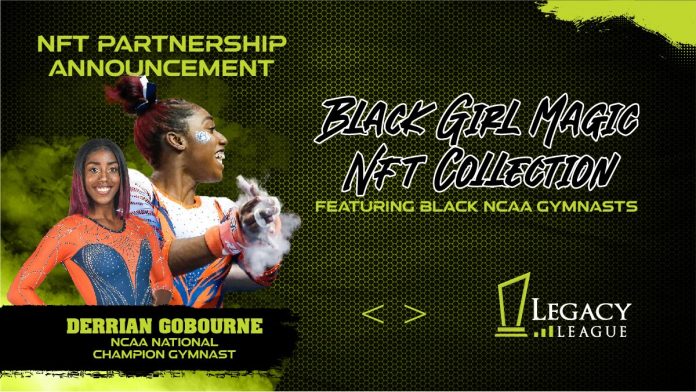 For the entire existence of secondary education, kids tried to figure out ways to make money while in college, from working hourly jobs and delivering pizza to finding part-time jobs on campus. Recent NCAA changes had finally allowed student-athletes to make money off their images, clothing and autographs, so in this technology and crypto-driven era, it was just a matter of time before athletes were also allowed to make money off their non-fungible-tokens (NFTs).

Auburn gymnast and 2019 National Champion Derrian Gobourne made BGM a reality. Her likeness is being sold in conjunction with the first NIL Summit in June, where Gobourne is nominated for two awards: College Athlete Innovator of the Year and Best Crypto Award.

“I am excited to launch my Black Girl Magic (BGM) NFT Collection on the Legacy League platform. Not only do their values align with mine, but there is also no better time to do it, the 22-year-old Gobourne said. “It’s time to celebrate, congratulate and pay honor and tribute to all of my sisters who have given so much to this sport and I want the world to see them.”

Legacy League enables the athletes to create and design their own brand and personal intellectual property (IP) rights and logos and engage in ecosystems to maximize their brand value.

The company’s BGM initiative is also working with gymnasts, including Sekai Wright (UCLA), Hannah Joyner (Rutgers), Amari Celestine (Missouri) and Gabrielle Stephen (Michigan State). They have all won national championships in their specialties.

“At a time when female student-athletes lag behind their male counterparts in the NIL ecosystem, we are excited to partner with these seven elite female athletes,” Legacy League President and co-founder Kurt Hallead said.  “Our mission is to level the playing field by providing every college athlete an easy and effortless way to maximize their income and leverage their brand with NFTs.”