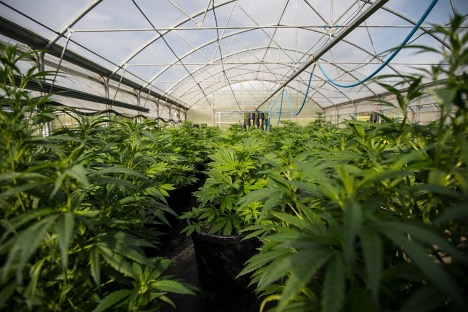 As we are no doubt aware by now, there’s a huge racial disparity in industrial hemp and cannabis production with only 6% of producers being Black.  A recent story from Kansas City NPR focused on a Black couple in Missouri creating the state’s first Black-owned hemp processing operation.

The KCUR NPR Story is below.

Just northwest of Missouri’s Lake of the Ozarks, past Mennonites in horse-drawn buggies, there’s a curvy road that leads to a forgotten piece of Missouri’s Black history – Lake Placid.

The Black-owned cabin retreat thrived in the mid-1900s. P.C. Turner, a doctor from Kansas City, designed it as a place of restoration and refuge for Black families across the state during segregation. But over the decades, many of the once sought-after cabins fell into disrepair.

“We’ve got what I call dilapidation – buildings with no walls,” said Brendalyn King.

Last year, she and her partner Osei Doyle purchased 244 acres of hilly, tree-covered land just beyond the cabins with the dream of rebuilding them using materials made of hemp.

The U.S. Department of Agriculture’s first-ever survey of hemp production released last month found a glaring diversity issue: Just 6% of hemp growers are Black in an industry worth nearly $825 million. Cannabis has been a hard market for people of color to break into, but some, including King, hope hemp offers a new way in.

“We want to be a Black-owned hemp processor. We want that to be a part of our legacy,” she said. “We moved here for this. We got a little side tracked, little forks in the road but it ended up being a nice road to be landed on.”

King grew up in St. Louis, while Doyle was born in Trinidad and Tobago. They met in Brooklyn, New York more than a decade before deciding to pack up and pursue hemp farming in the Midwest. In 2020, the couple moved to the St. Louis area on a promise to buy land in Illinois.

But their two growing seasons were tough. First, they lost money because they didn’t have a buyer lined up to purchase their hemp flower. In the second season, a rain storm destroyed much of the crop. Then suddenly, the deal to buy the land fell through.

“We felt like we were leading ourselves,” King said.

Leon Moses, farm superintendent at North Carolina A&T State University, said the challenges to growing hemp for Black farmers have largely stayed the same since the crop was federally legalized for production in 2018. He helped bring a research-based industrial hemp program to the historically Black institution in 2016.

Moses said the biggest barrier for Black farmers is access to land and capital. Dramatic land loss over generations has left Black farmers with about 1% of all farmland in the country.

He said if the federal government wants to increase diversity in the industrial hemp industry, it should offer the resources needed to buy land.

“First and foremost, provide either low-interest loans or grants or those kinds of things that make funding available,” Moses said. “If you want inclusiveness and you want diversity in hemp, then my first thought would be, look at what you might do to help them get involved, and you make opportunities.”

Angela Dawson is one person trying to make opportunities for Black farmers in hemp.

She’s the co-founder and president of the Forty Acre Cooperative in northern Minnesota, and she runs a hemp mentorship program for Black farmers across seven states, including Illinois and Indiana.

“We are using hemp as the economic basis and stimulus for really creating opportunities for our businesses,” she said. “It’s really tough to be an organic farmer. It usually doesn’t pencil out in terms of income.”

Dawson said growing hemp requires specific techniques and the right strain to thrive in the environment. She’s spent the last three years developing a healthy hemp strain that won’t test over the legal limit of 0.3% of THC, which is the psychoactive component of the plant. Testing too high can result in farmers losing their entire crop.

She’s teaching farmers how to grow hemp for CBD, the plant extract used in things like lotions and oils, on as little as two acres of land. Most of the farmers she works with have 10 acres of land or less.

King and Doyle have more than 200 acres to work with at Lake Placid, a place they say they fell in love with immediately when they found it in 2020. With the help of friends, they were able to buy it and have plans to restore the land as a place for Black serenity.

They still have a long way to go to achieve their dream. Last fall, the Missouri Department of Agriculture rejected their application for an industrial hemp fiber processing grant, which they’d hoped to kick start their operation. Now, they’re planning a Juneteenth fundraiser.

King said they’re still years away from planting their first crop, but she’s not going anywhere.

“I know that it’s a lifelong process,” she said. “‘To know that we have a lot of ideas but also see my life horizon I’m like ‘yeah, I have 50 years to actively do this.’”

Their goal is to rebuild the community that once thrived and center it around the possibilities of hemp production.